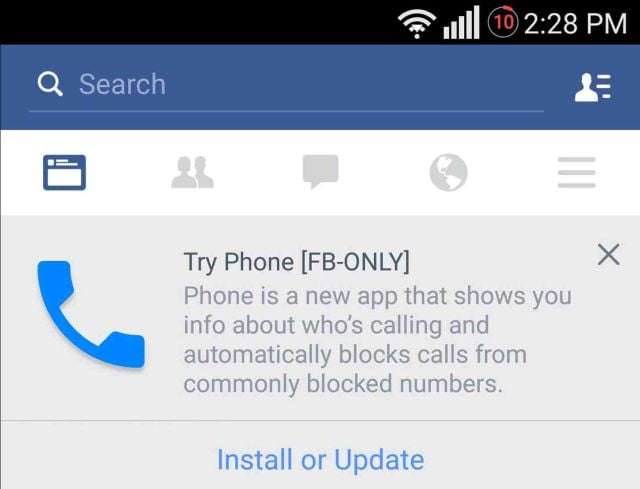 As Facebook becomes bigger, it’s becoming increasingly clear that the social media network in question wants to be more of an overall communications hub. Everything from instant messaging to general social media activity has been a mainstay in our lives, though one could make the argument that Facebook has been at the epicenter of that development. For this reason, recently leaked news about “Phone” does not come as much of a surprise.

According to an article on Forbes, Facebook is planning to release a new app simply called, “Phone.” When I first heard about the story, without looking at the details, I immediately thought that Facebook was going to give it another go with their physical Facebook phone, known as the HTC First, which was discontinued back in 2013. At the very least, I imagined that it would just be a new carrier, not unlike T-Mobile or Verizon, without the need of a physical device. However, the actual concept of “Phone” is simpler than that.

Essentially, “Phone” – an app developed by Facebook – will serve the purposes of showing caller information and blocking calls from those who have been blocked in the past. On the surface, this is a rather simple app, as useful as people might see it as. However, what I find to be the most intriguing is that it’s another step in the progression of Facebook’s communication devices. After all, many Facebook users take advantage of Messenger so that they can perform voice calls. Why wouldn’t the “Phone” app make sense?

Seeing as how Facebook is attempting to become more integrated into the carriers of its users, I have to wonder how much caution the company will exercise. After all, there was quite a bit of negative press when Messenger became a separate app from the general Facebook app, seeing as how most users viewed it as a hindrance. Despite how this took place as late as last year, these events stick with people. As a result, the Facebook Phone app is one that carries skepticism and Facebook has to be cautious of this.

If Facebook truly wants to get this Facebook Phone app across to its users, it should not be a mandatory addition. Even if this is the end goal that the social media mogul has in mind, it cannot be an instantaneous shift. As any online marketing firm can attest to, change is best accepted when it’s done slowly over time. This should be the key strategy in place for “Phone.” If this is done, Facebook will be that much closer to becoming part of everyday life.

What is your take on the recent news about Facebook’s Phone app? Positive, negative, or indifferent, please leave your thoughts down below!

See also: Facebook and the Idea of Mental Health