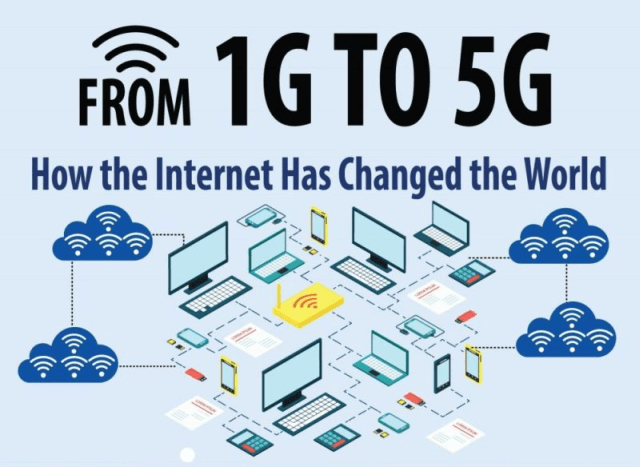 While civilizations on planet earth have been around for millennia, nothing has drawn them closer together quite like the Internet. The ability to connect people across thousands of miles in seconds is mind boggling to imagine. To be able to communicate, share knowledge with billions of people all over the globe is an amazing concept.

With billions of web pages and trillions of a bit of information seamlessly interconnected and stored all around the globe the ability to access this information from a single mobile device is truly genius.  The technology had evolved over the years from its beginning in 1997 to what we have now and the future of the wireless Internet access is even more amazing.

From 1G To 5G – Breaking down of Wireless Internet Access

The ability to communicate using the Internet was the only tip of the iceberg back in 1997, simple voice communication with analog devices with very limited capability. Then as technology improves, speed and data access grew exponentially along with it and so did the uses of this valuable data.

As time marched on and technology continued to advance so did the ways people used the Internet in their daily lives and we became a more globally connected world. Below is kind of a timeline that shows how the different eras or stages of the Wireless Internet Access has changed or evolved over time.

While the Internet has actually been around for many years, the wireless accessibility to the Internet via a mobile device came about in 1997. The connection speeds and bandwidth were extremely limited by today’s standards; with access speeds of 50 kbps and web pages were only 25 KB in size. The wireless devices were mainly capable of voice communication using analog technology. The download speed was so slow it would take a day and a half to download an 800MB movie.

A year later, the digital age hit the wireless communication industry and it had a huge impact on wireless Internet access. The technology inside the mobile devices advanced exponentially and the features allowed the user to get more enjoyment out of their experience when accessing the Internet. The digital devices were able to access wirelessly at speeds up to 250 kbps and that meant websites could be larger at 125 KB. The same 800MB digital movie can now be downloaded in just over 7 hours.

The broadband access has come to the wireless mobile industry and it revolutionized how the mobile user accessed and used the Internet. Mobile devices and service plans started to include text messaging, data and voice capabilities. The combination enhanced the communication capacity and people were soon talking and exchanging thoughts and ideas with other people on the other side of the world. Connection speeds dramatically increased with access speeds reaching up to 384 kbps and websites size expanded to 194 KB in size. The increased capacity and download speeds increased with the 800MB movie now being able to be downloaded in just over 4 hours.

Mobile devices transitioned into primarily data devices as more and more users were accessing the Internet using their wireless devices. Social media and other messaging services soon displaced text messaging as the primary means of digital communication. True mobile broadband brought new capabilities to the wireless mobile industry and expanded the horizons of the mobile user. Wireless speeds grew exponentially and access speeds reached 50 Mbps and websites grew larger as well to a maximum size of 75 MB. The same 800 MB digital movies can now be downloaded in 43 seconds.

The 5th generation is still three years away and the expectations are mind blowing if they actually come to fruition. However, the technology that is going to be the driver of the high-level access speeds has not been fully developed as of yet. The expected access speeds are supposed to hit an amazingly fast speed of 6400 Mbps and websites will be huge with an amazing, 3.2 GB in size. Download speeds will be so fast, you can download an entire 800MB digital movie in 1 sec.

If the past is any indication, the future of wireless Internet access is going to make the unimaginable possible. If the speed and bandwidth capabilities are even close to what is being expected, then the sky is truly the limit.

In the “From 1G To 5G How The Internet Has Changed The World” infographic below you can read how  technology had evolved over the years from its beginning (1997) to what we have now and the future of the wireless Internet access (5G and 6400 Mbps!)