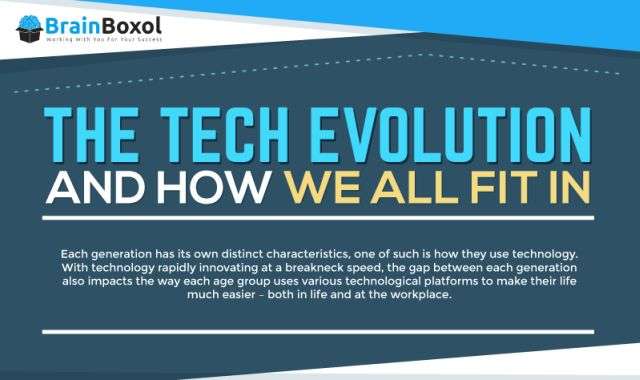 The world’s collective population can be best categorized in four generation groups or the tech evolution generations: Baby Boomers, Generation X, Millennials, and Centennials (or Post-Millennials). These generations all have their own distinct characteristics that establish where the generation starts and ends, which are brought about by different factors in their lives that have affected their growth and development.

The Tech Evolution And How We All Fit In

The generation born after World War II (1946-1964) – are so-called because of the “baby boom” or a dramatic increase in pregnancy and birth rates, which experts attribute to the end of the war in 1945. They are responsible for parenting much of those who belong in Generation X to the older members of the Millennial generation.

Those born between 1965 to 1976 – is the demographic unit that follows the baby boomers and precedes the Millennials. Those who belong in Generation X were called the “latchkey generation” due to them having reduced adult supervision, increased divorce rates, and increased maternal participation in the workforce.

Arguably deemed the most controversial generation by many publishings – were those who were born between 1977 to 1995. While the exact year range of this generation changes depending on the source, the true defining characteristic of Millennials is that they reached adulthood around the turn of the 21st Century, which is the basis for the generation’s name.

Centennials (Generation Z or iGen for some)

The Centennials – born from 1996 – is the generation to look out for, mainly due to them still growing up and are still being shaped by the environment and values around them, particularly with their “controversial” predecessors. They are the ones that have been born in a world where technology has already greatly advanced, and as such, may not relate much to the experiences of the older generations.

What separates them from the Millennials is the 9/11 attack – Millennials remember the attack profoundly and the implications of it not only to international affairs but to economic and security affairs as well. Much of the Centennials do not remember much about the devastating incident other than what documentaries and other historical accounts tell them. This does not mean that they do not understand what the incident is for the generations that have witnessed it, but only that they were too young to remember hearing about it.

Each generation, as shown, are fundamentally different from each other due to the many circumstances that they have experienced. They are influenced not only by the generation that preceded them, but also by the status of the economy and living, global situations, and how far technology has advanced. These factors not only influenced their characteristics, but also the medium they use, what they use their technology for, and their workplace attitudes.

Learn more about how the technological evolution has influenced these four generations and how we all fit in it with this infographic by BrainBoxol.