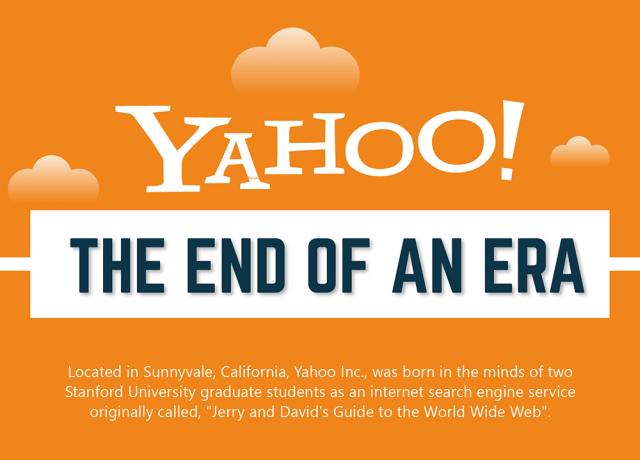 Yahoo! The End Of An Era

1. The Basics – Not everyone is going to remember this but there was a time not too long ago when Yahoo was the most popular search engine on the web. The company has seen its share of ups, downs, and major changes since it’s original debut back in 1994. After frequent changes in direction and upper-level management, the company was sold recently, bringing a significant era in online history to a close.

2. The Start – At the pace technology develops nowadays Yahoo might seem ancient but in fact, it is only 22 years old, barely out of college yet. Still, the version of Yahoo that existed in 1994 is significantly different than what most are probably familiar with today. The engine wasn’t even called Yahoo originally. At first, it was called Jerry and David’s Guide to the World Wide Web, a lengthy but highly accurate descriptor. It was named after the co-creative team of Jerry Yang and David Filo. The two men originally developed the engine as a simple list of some of their favorite websites fitted with a built-in search function for the sake of convenience. Yang and Filo were graduate students at the time and studied electrical engineering.

3. Growth – By 1998 the internet had seen a massive surge in growth and popularity. Yahoo was now one of the most visited sites on the web inspiring many copycats and other dot.com ventures. By then the software had developed considerably to possess a greater range and higher level of search accuracy.

4. Details – At its biggest height, Yahoo, was estimated at a value of around 120 Billion in US Dollars and possibly more than that. That was some time ago however and the companies recent sale came with a price tag of $4.8 billion. A considerable amount in the eyes of most people but nowhere near what Yahoo was worth at the height of its popularity. Even more recently the company commanded a large price. In 2008 Microsoft attempted to purchase Yahoo and add it to the many companies under its wing. Their bid? No less than $44.6 Billion. In January of 2000, Yahoo saw its highest share price of nearly $475 per share. To give you a sense of the market’s tumultuous nature though you only need to look at Yahoo’s share a year later. Within 18 months they experience their lowest share value of $8.11 per share. That’s quite a drop for such a short time frame.

Over the course of its 22-year long lifespan as an independent company, Yahoo purchased 114 smaller companies and invested $18.5 billion in acquisitions. It’s largest single investment was the purchase of a company called Broadcast.com for $5.7 billion. That’s several billion over what was paid for both Overture and Tumblr.

Yahoo has had a total of 8 different CEO’s over the course of its 22 years. The longest time any of them served in the position was 6 years. These were Timothy Koogel who led the company after it’s founding and his replacement Terry Semel. Koogel was CEO of Yahoo from 1995 to 2001. Semel held the reins from 2001 to 2007. Afterwards, only a few successors held the title for more than two years consecutively. The longest of these was Marissa Mayer who was also the last CEO of Yahoo as an independent company. She served in the role for 4 years total, spanning from 2012 to 2016.

Interestingly Mayer wasn’t the only CEO of Yahoo in 2012. That year saw four individuals holding the seat including Mayer herself. The others were Tim Morse, Scott Thompson, and Ross Levinsohn. Besides Mayer, none of these individuals had the CEO title more than a year before it was handed off again.

The following Yahoo! The End Of An Era Infographic is made by shopsmart and depicts the rise and fall of Yahoo.