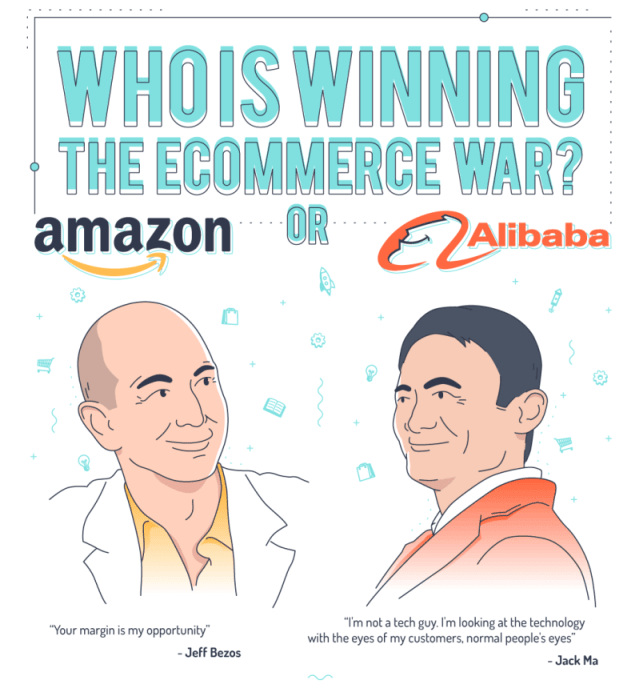 It’s battle time in the e-commerce world and there’s no denying it.

Over the past 20 years, it has evolved so much that most consumers today prefer virtual shopping to actually visiting physical stores. And not just consumers, but businesses – both small and big – are beginning to make use of e-commerce platforms to sell their services and products.

The evolution and transformation of e-commerce giants, for instance, Amazon and Alibaba, has led them to compete against each other in a variety of areas, and it is important for us to realize who stands where and who the favorites are.

Who is Winning the Global E-commerce Marathon: Amazon or Alibaba?

The American e-commerce company Amazon Inc. – widely known as Amazon – was launched by Jeff Bezos in 1996 as an online bookstore, later venturing into selling music and DVDs.

Having separate retail websites in over 15 countries, Amazon has easily become the most common e-commerce name selling almost everything under the sun!

The Chinese e-commerce company- Alibaba Group Holding Limited or just Alibaba – was founded by Jack Ma and 17 others in 1999 as a humble global wholesale market.

Alibaba is the most valued and largest retailer as on 2016 May, and without it’s called the ‘Amazon of China’ even though the business models are entirely different!

According to Ecommerce-Platforms.com, Amazon stands first in the market capitalization and employee count compared to Alibaba. Serving their customers with a wide array of physical products and virtual services such as cloud computing and digital payment services, both Amazon and Alibaba handle billions in sales.

In the year 2013, two of Alibaba’s services handled USD 240 in sales– which was double that of Amazon’s sales volumes and triple that of eBay’s.

To give you an exact figure, there are 310 million customer accounts on Amazon and 493 million monthly users in Alibaba with 443 million active buyers. Considering the population, 8 out of every 10 people in the USA are active internet users; and 5 out of 10 people in China use the Internet.

53% of online sales growth in the United States was contributed by Amazon alone and this accounted for 3% of total retail volume. Alibaba accounts for 11.18% of the same in China.

There’s no denying that Amazon has the trust of the majority when compared to Alibaba. The brand value of Amazon is 98.99 billion US dollars and Alibaba is at 43.9. Forbes has ranked Amazon at # 4 worldwide which is ahead of Alibaba at # 12.

Being a computer scientist himself, Jeff Bezos is a smart player. He always comes up with innovative products and services useful to his consumers, and Amazon finds innovative ways to sell these to consumers.

Amazon Prime is a great example. Amazon also comes up with special-day sales on Black Friday and Cyber Monday etc.

Singles Day, an annual shopping holiday in China was introduced by Alibaba and is considered the biggest shopping event in the world. The sale on this day in 2016 was $ 17.49 billion.

It’ll be interesting to watch where these 2 companies stand in 3 years. By 2020, Alibaba has huge potential to become the #1 on their home turf and Amazon, with its innovations, is just unstoppable.

We know that’s a lot of information to take in. Have a look at the infographic below by Ecommerce-Platforms.com to get a clearer picture of the present scenario.