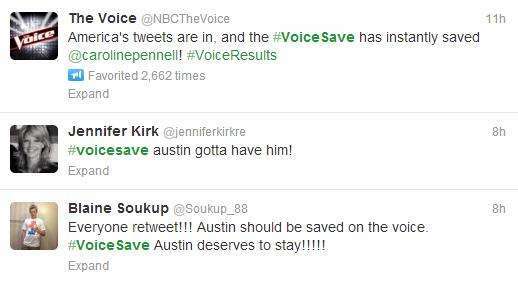 In today’s world, the line between social media and TV has been growing thinner and thinner. We can now watch our favorite TV shows on our laptops, ‘like’ a show’s fan page on Facebook, and tweet using hashtags about the big shock of each episode. But NBC’s The Voice took this one step further last week and created a social media spark that ignited the latest development in the TV/Internet relationship – with an “instant save.” Was the stunt a success? What does it mean for the future of television and social media? Let’s take a closer look.

If you’re not familiar with The Voice, contestants have blind auditions for the singing competition and are faced with celebrity judges Christina Aguilera, Cee-lo Green, Adam Levine and Blake Shelton. They are divided into teams of each celebrity. Every week, two singers are voted off by America’s votes, similar to American Idol. But this week, The Voice added a new element – the instant save. The reasoning behind the instant save was the fact that in previous seasons of the show, some of America’s favorites were voted off too early for the public’s liking. This is a second chance for not only the contestants, but America as well. Plus, doing it over Twitter, The Voice got even more social media exposure than normal.

Using Twitter, viewers of the show were told to hashtag #VoiceSave as well as the first name of the contestant they wanted to save.  They were given five minutes to vote at the end of the show, after the three contestants with the least amount of votes were revealed. Not only did this create quite a buzz on Twitter leading up to the vote, but over 300,000 votes were tweeted in those five minutes for the contestants. Sounds simple enough, what could possibly go wrong?

There seems to be a bit of discrepancy over the counting and tally-up of the votes. While contestant Kat, ended up winning, Josh’s fans seemed to create more of a buzz overall. So why did Kat win? The short answer is, more people voted for her in the time constraints allotted, and followed the instructions that included tweeting the correct hashtags. There also seemed to be an issue with the spelling of one of the contestants’ name. As with any live show, the results are unpredictable and adding another level of chance to it can cause some additional confusion. Overall, for the first attempt at this revolutionary concept, it seems to have been fairly well received by viewers, critics, and contestants alike.

Will the “Instant Save” happen again? The verdict is still out on that, as NBC has made no comment on committing to another one in the future, but as far as the collaboration between social media and television goes, this has brought things to a whole new level. On the night it airs, The Voice usually does trend on Twitter, but with this move, it’s almost a guarantee. Instead of paying to have a sponsored tweet like some companies do, The Voice took things into their own hands and gave their viewers exactly what they wanted in nearly an instant, thanks to social media. It will be interesting to see if other competitions will follow The Voice’s lead and cause an instant buzz by using social media during live shows.

See also: #YesAllWomen – The Recipe for a Perfect Hashtag