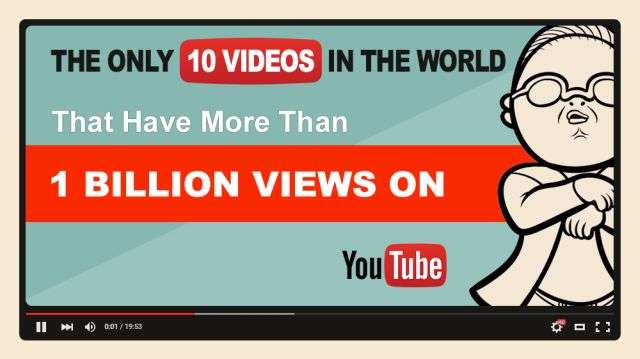 Did you know that today (October 7, 2015) Wiz Khalifa featuring Charlie Puth with his song “See You Again” (Furious 7 Soundtrack) became the 10th video that passed 1 billion views on YouTube?

Yes, it’s pretty weird how 10 YouTube videos succeeded to pass 1 billion views in only 10 years since YouTube has been launched.

The most interesting statistics from this incredible top 10 YouTube videos with billions of views are:

Artists / Bands with the most videos in this billion views top: Taylor Swift (2 videos) and Katy Perry (2 videos)

Artist / Band with the most dislikes on a video: Justin Bieber featuring Ludacris – Baby (5,119,676 likes)

Artist / Band that reached 1 billion views last (from this top 10):  Justin Bieber featuring Ludacris – Baby (48 months)
In the YouTube infographic below made by Hot in Social Media, you can see all the 10 videos that have more than 1 billion views on YouTube. Which video from this (historical) YouTube top is your favorite and which one you really can’t stand?