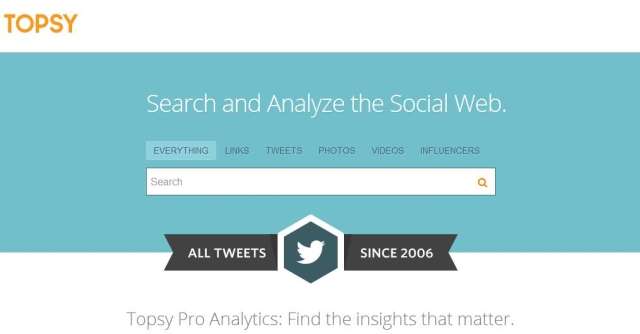 It seems like more often than not, people are tweeting everything around them. It’s amazing that Twitter only launched in 2006 and now more than 359 million active users are tweeting their little hearts out each day. While Twitter is fun for personal use, more and more businesses and companies are finding it beneficial to reach their audiences in a whole new and solely interactive way. Companies have launched social media campaigns that require users to tweet a #hashtag in order to benefit in some way from the company. This symbiotic relationship has sparked a whole new way of marketing. One of the biggest flaws in marketing for a Twitter audience has always been finding a way to measure the success of the campaign. One tool can help you monitor twitter activity on a whole new level, and it’s called Topsy.

According to the definition on their website, “Topsy is a realtime search engine powered by the Social Web. Unlike traditional web search engines, Topsy indexes and ranks search results based upon the most influential conversations millions of people are having every day about each specific term, topic, page or domain queried.”

Basically, in plain English, this means that you can search through any tweet since the beginning of time (or 2006), which is over 425 billion tweets, to find certain words, phrases, usernames and even hashtags. For a business trying to see the reach twitter can have on an audience, there is no better tool. Oh and perhaps the best part about Topsy for Twitter: it’s completely free.

The analytics of Topsy work in a very specific way. With Topsy Social Analytics, you can analyze domains, Twitter usernames, or keywords — and they can be compared over four timeframes: one day, a week, two weeks or a month. Each type of analysis returns different results. Not only can Topsy be a great way to see results, but it’s also a great way to present results. Compare three domains, for example, and Topsy analytics will chart the number of links it found to each. Type in three keywords (including names, as in the image at the beginning of this article) and Topsy shows how many times each was mentioned. And if you compare up to three Twitter usernames, Topsy shows how many replies/mentions each received.

You can even analyze your competition’s Twitter activity using Topsy. Marketers will like this for competitive analysis: Put your domain and two competitors’ domains in the comparison tool and see which links on each site have been most popular. And, it’s a bit hard to see in the screenshot above, but there’s also a link to download the link data in CSV format.

Once you use Topsy for your business and want to get even more out of it, you can switch to Topsy Pro, the professional version of Topsy, which is currently offering a 14 day free trial. Topsy pro provides you with a regular report of twitter activity, a list of the most influential leaders on Twitter, a detailed report of your specific campaign (as well as tracking for that campaign) , as well as a historical analysis of the social media data it finds. The pro version can be helpful for a number of businesses, especially those in SEO and inbound marketing.

Regardless of what your business is, in today’s world it’s more important than ever to have an online presence. But as we’ve seen lately, marketing towards your tweeters and Facebookers is only half the battle. The other half is finding a way to quantify the results of a social media campaign. There are many tools out there to help you do just that and Topsy for Twitter is one of the best all around when it comes to quality and affordability.