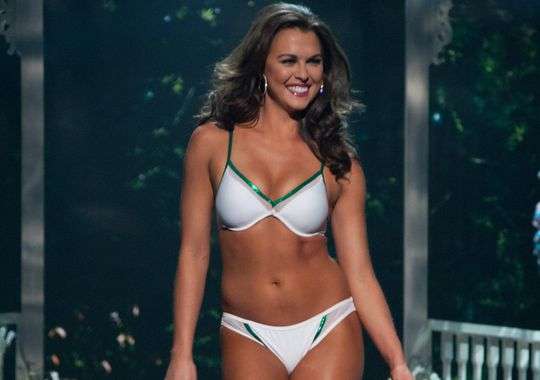 When Mekayla Diehl, better known as Miss Indiana, stepped onto the Miss USA stage rocking an itsy bitsy teeny weeny bikini, little did she know she was about to become a social media phenomenon. It’s nothing new for a scantily clad woman to make waves on Twitter and Facebook. What was unique about Diehl, a 25-year-old from Elkhart, Ind., was that she had a few more curves than her competitors. She weighs 137 pounds, downright zaftig for a pageant gal.

This sparked a tidal wave of attention on Twitter, where the “you go girls” were still echoing days after Diehl had left the stage. Her lightning-fast rise to fame provides us with a great guide on how to become a social media standout in six steps.

6 Lessons from Miss Indiana: How to Become a Social Media Phenomenon

While the other women were starving themselves to fit into their size 0 dresses, Diehl chose to work out and reward herself with normal person food rather than living on watercress and coconut water. Her distinctive approach helped her stand out, hence the Twitter love.

Who among us hasn’t struggled with body issues? Diehl was straightforward about her weight and how she’s not like the other pageant contenders, which made her incredibly relatable. Anyone who’s ever frowned at a jiggly thigh or cursed their saddlebags can empathize with being bigger than every other girl in the room.

Say this for Diehl: She does not lack for confidence, and she shouldn’t. What made her so appealing is that she radiated a healthy self image as she strutted across the stage. People are drawn to confidence, and they’re much more likely to support someone comfortable in their own skin than a shrinking violet who refuses to acknowledge their own strengths.

You can’t become a phenomenon without overcoming the haters, and there were also plenty of those on Twitter. Some called Diehl out for being “thick” or “fat,” which is part of why so many people jumped to her defense and praised her so-called bigger body. The absurdity of a woman who’s a size 4 being called fat is certainly enough to spark a response among Twitter users who otherwise never would have paid attention to the Miss USA pageant.

Once the pageant was over, Diehl took to Twitter to thank everyone who supported her and stuck up for her. She did it with class, but she also savvily retweeted many of the articles being written about her as well, keeping up the social media attention.

6. Get Out and Represent

You can’t stay a social media phenomenon unless you fan the flames, and Diehl has wisely been doing that since the pageant. She’s adopted body image as a platform and has made appearances on “Good Morning America,” “Fox and Friends,” “Entertainment Tonight” and a slew of other shows to discuss her own body and the body image problems we have in America. Diehl showed she’s not just another pretty face; she’s also a pretty smart businesswoman.

See also:  How to Hijack a Celebrity Wedding on Social Media