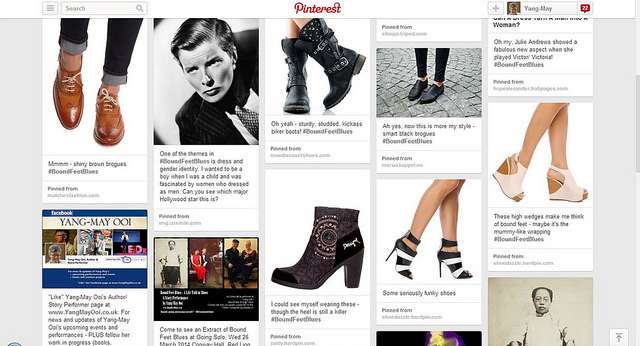 Two years ago when you were asked to name the hottest social network, the answer was a no-brainer: Pinterest. The combination bulletin board/inspiration site made it a hundred times easier to keep track of all the really cool things you find online but rarely remember to read or try out. These days, however, interest in Pinterest seems to have cooled.

It’s become an afterthought behind rising social-media phenomena like Instagram and Snapchat, which really couldn’t come at a worse time for the site. Pinterest recently started experimenting with paid advertisements, which could potentially lead to backlash on a site that’s up until now been devoid of blatant commercialism.

So the question is, has Pinterest’s meteoric rise led to a fast descent?

There are signs that Pinterest isn’t quite all it’s cracked up to be. A new report that examines the quality of traffic referrals from major social-media sites finds that Pinterest ranks number six when it comes to post-click engagement. Pinterest users visit fewer referral pages per visit, just 1.71, and spend less time on those sites, only 64.67 seconds, ranking behind every other major social media site with the exception of StumbleUpon.

This may come as a surprise, because really the whole purpose of Pinterest is to refer people to other sites. It suggests that while people are using the social network as a virtual pinboard, they aren’t too interested in revisiting anything they’re pinning (not yet at least).

Most sites will get hacked at one point or another, but a particularly damaging recent attack on Pinterest has raised questions about its security. Call it a virtual booty call: Dozens of pictures of butts were posted to a handful of users’ accounts. While hacking of any sort is bothersome, the visual nature of Pinterest makes it of particular interest to hackers because they can wreak such impactful havoc. Seeing a bare behind where you thought there was going to be a recipe for strawberry jam is pretty jarring.

A Decline in Buzz

Perhaps the biggest problem for Pinterest right now, though, is the fact that it’s become old news. Social media thrives on the new and interesting; just look at how quickly Snapchat and Whatsapp went from fringe apps to billion-dollar businesses. Social networking moves not at the speed of light but at the speed of buzz, and if you’re not getting any you may as well be MySpace or Friendster.

After months of chatter over Pinterest, excitement about the site has definitely faded. It’s still growing but much more slowly than it was at its peak. We’ll see if the new advertising may spark renewed interest in the site from businesses. However, it might just deter more users away if they keep getting irrelevant ads about load cell products in their Pinterest stream.

Can Pinterest maintain its status as an up-and-coming social network? Only time, and a lot fewer butt pictures, will tell.