Is Social Media Overtaking Traditional Media on the Stock Market?

Trading is all about tips. To stay ahead of competitors, stock market traders are always looking for information that gives them an advantage. Newspapers were once a trader’s main weapon, but now social media has come to conquer. So which is best for the industry?

Be first to know. In financial services, the speed of information is paramount. Twitter is the closest to instant that you’ll find, even more so if you’re armed with a mobile.

Get in with the right crowd. From Wall Street to the City of London, you’ll find some of the most important financial journalists and influencers on social media channels. By following the right accounts, you can keep updated with all the news and views that matter. Zak Mir of Spreadbet magazine, an industry publication even goes as far to say that “if you follow the right 20 – 30 people in the trading and financial markets area then you should be fully informed in terms of what to think, what to trade and when to trade it. Yes, Twitter is that good.”  Here are a few worth your time:

Learn from the trends. Tammy Poon from Spread Co, a leading financial services provider, says that traders should look at how a story is perceived, “has it got shares or favourites”? Twitter can show “whether a story is reactive or not”, making it a barometer of how news stories are being perceived.

Hedge your bets. There is some evidence to suggest that Twitter itself determines share prices. A study from 2012 (graph shown below) showed that over the course of a day on the market, there was a link between the stock price of Facebook shares and the opinions being expressed about the company on Twitter. 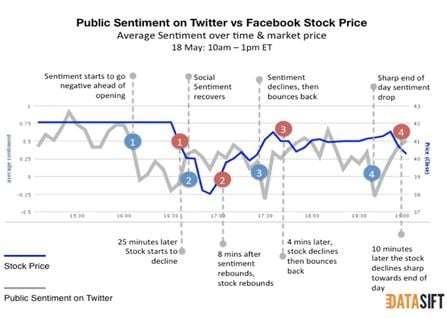 Trust the experts. Twitter, though instant, is not all that reliable. Any account can post any 140 characters: true, speculative or downright wrong. Here’s where the newspaper’s traditional regulations take the lead. The internal level of professionalism at news outlets means there is a certain standard set. For an industry as sensitive as finance, such accuracy is invaluable.

Hear from the masses. Twitter’s demographic is far from diverse. During the Scottish referendum there was an overriding sense on Twitter that the country would vote for independence, but they didn’t, not anywhere near. This is where Twitter’s average user bracket of 18-35 swayed the perceived opinion to show one that did not represent the masses.

There are positive and negative aspects about the challenge between Newspapers vs Newsfeeds when keeping up to date with the stock market. It would not be wise for a trader to disregard either, but rather supplement the two to help inform trading choices. It would also be wise to take both with a healthy sprinkling of salt.

See also: How to Use Traditional Marketing within Social Media