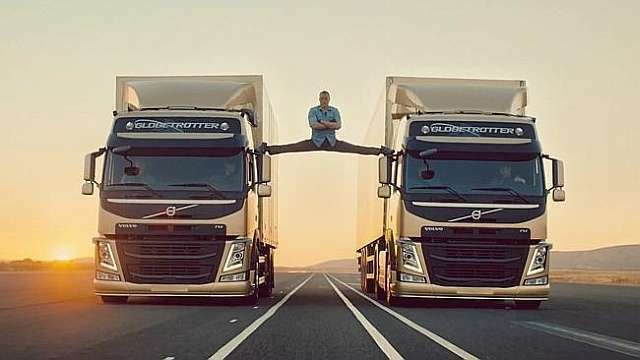 These days the Internet is buzzing about the new auto commercial that shows actor Jean-Claude Van Damme who perform an Epic Split Video between two moving Volvo Trucks.

“The stunt is real and is performed in just one take. It’s a daring stunt but we had full control. There was never any real danger involved.” said Anders Vilhelmsson, who is the public relation manager for the Volvo Trucks.

For those asking about #TheEpicSplit – “The stunt is real and is performed in just one take,” (Anders Vilhelmsson)

Van Damme (age 53), was hooked to some safety lines that aren’t visible in the YouTube film, and both of his feet where on a small platform that was built on the trucks’ side mirrors, but the feet aren’t secured to the mirrors.

This video, meant to advertise Volvo Trucks’ new dynamic steering system and  has reached 6 million views in just 24 hours since the video was published on YouTube.