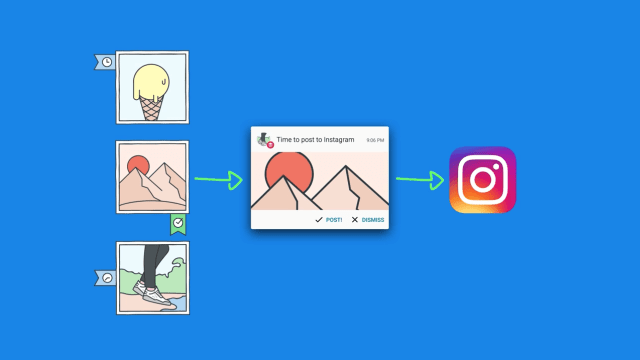 Signifying Buffer’s dominance in the world of social media management, Instagram has now partnered with the social tool to allow users to schedule their posts ahead of time. Before you sign up and start rejoicing at all the extra time you’ll have, it isn’t quite as great as the Buffer marketing team would have you believe. Instagram still doesn’t allow third-party apps to post on its behalf but it will allow Buffer to schedule them for you. This is a big difference when compared to having full scheduling automation, but it will make it a little easier to organise your posting. The feature won’t post automatically, as it does for Facebook or Twitter, but sends a push notification to your phone instead to let you know when to send the image.

Scheduling works in conjunction with the Buffer app on Android and iOS. Once you create the post as normal in Buffer (web or mobile), you’ll get a reminder on your phone at the allotted time. This reminder is just like any other push notification which you then click on to open the app. On opening, the image you selected when you created the post is ready for editing, and the caption you wrote is automatically copied to the clipboard. Once the image is ready you simply paste the text and click to post it. It is a nifty feature that is really just a workaround for the current Instagram API limitations.  Scheduling will satisfy people who work across multiple accounts but altogether it just takes extra time when creating and posting. The new Buffer for Instagram feature is for all Buffer plans but only the Awesome plan lets you connect more than one account. Ultimately, Buffer is the big winner here being the only social tool with anything close to scheduling on the social platform, meanwhile, somewhere, there is a little owl quietly crying at being left out of the Instagram nest.

See also: Use Buffer To Schedule Post And Simplify Your Social Marketing