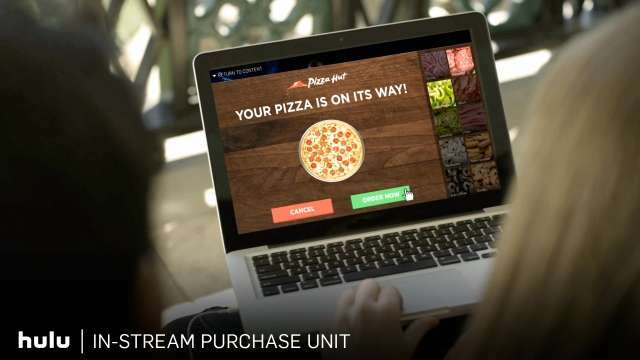 It’s Friday night and you don’t feel like going out to celebrate another week conquered. Instead, you take it upon yourself to sit down at home with your laptop – maybe connected to the HDMI port on your high-def TV – and fire up Hulu. As you watch one show from the next, you are met with a number of “more practical advertising” clips, some of them less relevant than others. Nonetheless, you persevere with the interest of watching television on the mind.

At the risk of asking a silly question, what would you like to have for dinner that night?

Hulu and the Case of More Practical Advertising

It was recently announced that Hulu would be partnering up with Pizza Hut in order to bring a different kind of ad placement to the well-known streaming service. Essentially, while watching a Pizza Hut commercial, you will be able to actually order a pizza from the screen that you’re on. Ordering a pizza is easy enough already these days, especially when you have the release of Domino’s iPad ordering app, which is customizable in regards to toppings. As a result, Hulu’s integration of specialized Pizza Hut practical advertising, isn’t totally out of the ordinary.

This is important and one of the reasons that an online marketing firm can draw attention to is the fact that people watch television differently these days. Cable isn’t a dead concept by any means but it’s apparent that, with the developments seen in the digital realm, people with Internet have more of a choice. They can watch shows – full seasons, if they so choose – without having to sit through one lengthy commercial break after another. Digital is where the money is and Hulu recognizes this.

In addition, the idea of ordering a pizza of Hulu can be seen as something of a novelty, if nothing else. This is especially true if you are someone who likes to plan day-long binging sessions of TV shows that you cannot easily catch during weekdays. During said sessions, your stomach is going to fight with your desire for entertainment. Instead of having to reach for the phone in order to call Pizza Hut, it would be far easier to simply click the ad on the screen and go from there. This takes less time, in addition to a more minimal impact to one’s phone bill.

Ads and commercials are here to stay and it’s understandable that people will look at them with negativity. Many of these commercials may not even be relevant to your interests and, more often than not, come across as timewasters that are far from welcome. With that said, Hulu’s collaboration with Pizza Hut is a different take on commercials and one that users may actually benefit from. Who’s to say that this can’t start something of a trend amongst other restaurants and food chains? Stranger things have happened.

Do you believe that there is value behind this particular team up or do you see these ads as middling efforts in the long term? Please leave your thoughts below!