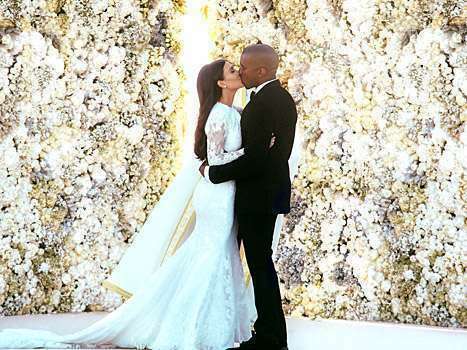 You may not be able to tell Kim Kardashian from Khloe or Kourtney, but you should give a hoot about her wedding. When Kim and longtime beau Kanye West tied the knot over the weekend, social media went bonkers, most notably Twitter and Instagram. Their nuptials popped up in trending topics over and over, and even days after this celebrity wedding on social media or outside it, people are still talking about it as though their own cousin was the bride.

Kim and Kanye is hardly the only couple to dominate social media in this manner. In fact, sometimes Twitter buzz even outlasts a  couple’s union — remember Kardashian’s last ill-fated three-month-long marriage? Smart marketers and SEOs know they can get some social media mileage out of these events, even if they’ve never so much as glanced at an issue of Us Weekly before. Here are some fun and clever ways to “hijack” a celebrity’s wedding to benefit your social media account.

How to Hijack a Celebrity Wedding on Social Media

Be in the Know

It helps to anticipate topics that may be trending on Facebook, Twitter and Instagram ahead of time. Though there’s the occasional oddity, such as social media’s recent fascination with Patrick Stewart and Ian McKellen, for the most part you can anticipate when a big event is coming up. Make sure you’re ready to post about it on social media as soon as it begins trending.

Every celebrity wedding generates its share of specialized hashtags. Some you may be able to figure them out in advance; you don’t need a degree in Hollywoodese to guess that Kimye would trend during the Kim-Kanye nuptials. But pay close attention to other people associated with the wedding, too. You may be able to get good traffic out of them.

For instance, Twitter blew up with speculation over why Kim’s brother, Rob, didn’t attend the wedding, sending his name trending. You can hop on the associated name with your own observations or somehow tie the topic in with your product. For instance, if you sell generators, you might say, “Why did #RobKardashian miss the wedding? Maybe the electricity failed and his alarm didn’t go off. Next time use a generator.”

Don’t just send out random tweets about the new marriage. Say something that adds to the discussion on the subject. You might speculate on where the reception’s being held or mention celebrity wedding guests or suggest fun songs to play at the reception. Communicate with others who are posting about the same topic to start a fun dialogue.

But Don’t Be Mean

It’s unprofessional to be snarky and snide in business, even on a Twitter account. Remember, you’re still representing your business, no matter how silly you personally might find celebrity gossip or weddings. You’re using this as a tool to build traffic, and you have to respect the people who do want to read about this stuff. Don’t attack the couple and don’t engage in conversations about how long this marriage will last.

Use the rule of Mom: If you wouldn’t want your Mom to read what you wrote, you shouldn’t post it.

See also:  How to hitch your brand to the Super Bowl using Social Media