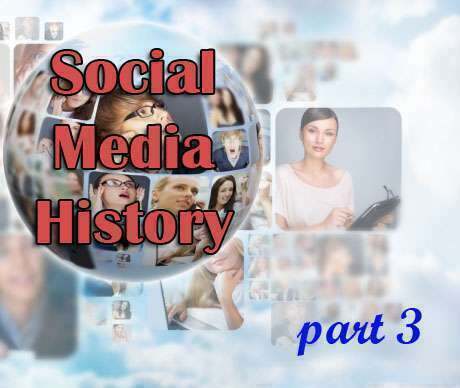 Here is Part 3 of the History, evolution and influence in Social Media

Delicious is a social bookmarking site founded in 2003. It allows its users to bookmark any content they find online, tag that content, and then share it with other users.
Users can search for bookmarks or browse for them via tags. Delicious also allows users to view the most popular content among other users, as well as up-and-coming content, not unlike most social news sites.

Was founded in 2004 by Kevin Rose, Ron Gorodetzky, Jay Adelson, and Owen Byrne.
Digg users can share links to anything online and other users can vote that content up (dig) or down (bury). Users can also comment on content posted by others and keep a friends list. Digg has undergone a lot of controversy in its day, including criticism about the power the top 100 Digg users have over what becomes popular on the site.
The “Digg Effect” when content makes it to the front page, thereby sending a huge influx of traffic to that site, often overloading its servers, is also well-known and often frustrating to those unprepared for the sudden popularity.

Twitter was founded in 2006 and gained a lot of popularity during the 2007 South by Southwest conference. Tweets tripled during the conference, from 20k per day to 60k. Twitter has developed a cult-like following and has a number of famous users (Demi Moore, Oprah, etc).
Twitter has also spawned a number of third-party sites and apps, turning it into more of a platform than a single service. There are Twitter clients for updating and managing followers; services that track Twitter trends; and services for posting photos and videos directly to Twitter.

Posterous is the newest major microblogging application, started by Y Combinator in May 2009. Users post content via email. Emails can include attached photos, MP3s and other file types that are also posted. No initial signup is needed, setting it apart from most other social media services.

Tumblr is sort of a cross between a lifestreaming application and a microblogging platform. Tumblr was founded in 2007 and had around 75,000 tumblebloggers switches to the service immediately. The site lets users post photos, video, text, audio, links, conversations, and other content on blog-like sites. There are mobile applications available for posting to Tumblr, making it ideal for lifestreaming.
It’s similar to Twitter and other microblogging platforms in the way that it lets you follow other Tumblr users and see their updates in a specialized dashboard feed.
Lifestreaming and Lifecasting

Ustream was founded in the summer of 2006 and has become the streaming video host of choice for celebrities like Ashton Kutcher and Soleil Moon Frye.
While most Ustream users only go live occasionally, there are channels that are live around the clock. Ustream allows viewers to post comments and ask questions directly to the feed host during live broadcasts, and this interactivity often engages users to a greater extent than other video sites where videos are posted after they’ve been filmed instead of being streamed live.

Justin.tv is a streaming video host founded in October 2006 that lets life casters and live show creators to broadcast to hundreds or thousands of Internet users.
iJustine is probably Justin tv social ’s most public user, lifecasting practically her entire life on the site at once. There are more than 400,000 channels on Justin.tv, and they get more than 41 million unique visitors each month.

FriendFeed, which was launched in 2007 and was recently purchased by Facebook, allows you to integrate most of your online activities in one place (Twitter, RSS feeds, and Flickr, among others). It’s also a social network in its own right, with the ability to create friends lists, post updates, and otherwise, communicate.
It seems that nowadays there are social and user-generated sites for just about every activity you can imagine. There are social shopping sites, social financial planning sites, sites for getting books, apps, movies and other reviews. Sites to plan your travels and share them with others.
Social media has become a huge part of the lives of millions of people worldwide. Whether it’s something as simple as looking up reviews of movies from real, live people or getting advice on major life decisions, there are social sites out there to provide you with the information you seek.
Even on general-purpose social networks and social media sites like Twitter, there are thousands of ways to get input on just about anything.
Instead of using Google the next time you have a question about something, try asking on Twitter. A lot of the time you get better information from the crowd than going over pages of search results.
That’s not to say that social media doesn’t have a measurable impact on some businesses. For example: when a Southwest Airlines crew decided comedian Kevin Smith was too fat to fly, he tweeted a series of irate messages to the company. With plenty more disgruntled and stranded customers, the airline industry can no longer ignore the colorful complaints that would have once been rerouted to the nearest trash can. It’s still too early to determine if the negative “press” will harm the industry more than the forced improvements in customer care will help.
The influence in the social media world can be huge if you know how, when and who to ask to go directly to the target audience you want.