We have put together a massive infographic here for you to see what’s what in the world of social media, from the past, present and future. Some people may say this infographic is just too big, too informative, and too graphic, but that just proves you should never listen to “some people”.

In this post, we will be digging deeper into the social media battle between Hillary Clinton vs Donald Trump, as the election draws ever closer. 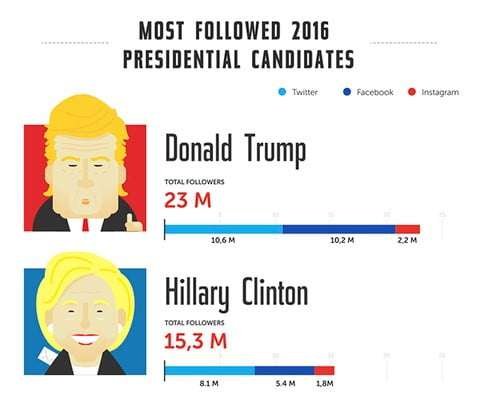 Hillary Clinton is far less personally connected with her followers. Most of her tweets are sent out by campaign staff members and the few personally sent tweets are signed “-H”. On the other hand, Donald Trump seems to do most, if not all, of the tweeting himself. There is nothing on any of his tweets, whether “signing” or other means, that would indicate anyone else is sending the tweets for him.

On Facebook, Trump has over 11 million followers while Clinton has almost 7 million. When it comes down to which candidate gets more “likes” on their Facebook messages, Donald Trump is the clear winner. An example from the time of writing: Trump posted a picture of the crowd at a rally in Pennsylvania in which he thanked them for showing up – it received almost 50,000 likes within 6 hours of posting. In comparison, Clinton posted two videos attacking Trump – both received only a little more than 3,000 likes each within the same time period as Trump’s single message.

On the popular imaged based social media platform Instagram, the numbers are fairly even as far as how many followers each candidate has. Trump leads slightly with 2.6 million followers over Clinton with 2.4 million. Both candidates also get very close to the same amount of likes on their images and plays on their videos on Instagram.

For those who are not familiar with how Twitter works: a retweet is basically a way for a user to pass on a tweet from someone else so that it will be seen by the user’s followers. A retweet is not always a complete endorsement of what was said in the original message, but it is usually a good indicator that the user likes what they’re seeing and wants other people to see it too.

The trend continues when comparing other tweets of similar age between the candidates. Trump gets far more retweets – sometimes over ten times more – compared to Clinton. The reasons for this large difference are obviously complicated and varied, but it could be seen as an indication that Trump’s supporters are much more enthusiastic about their candidate, while Clinton’s supporters don’t really feel like spreading her message as much.

Are Their Supporters “Real”?

This may seem like a strange question to ask at first. Of course, there are real people who support each candidate and follow them on social media, but do they really have as many followers as the statistics are telling us? Well, there is no easy way to find out this information. There are some websites and tools that claim to be a “Twitter audit”, and they will tell you how many followers of any given person that they believe to be fake.

One of these popular tools shows that Hillary Clinton has 63% “real” followers, while Donald Trump has 61%. That is over 3 million followers for each candidate that this tool believes to be fake. It’s not that easy, though. All of these tools use automated processes to come up with these numbers, and it’s anything but foolproof. Twitter users who do not tweet much, haven’t tweeted in a long time, or have an unusual ratio of “followers to followed” are flagged as fake by these audit tools.

What this means is that a large number of the so-called fake followers from each candidate are actually very real – they just aren’t very active. Some people just like to watch, read, and not actually send out many tweets for themselves. To prove this point, let’s take a look at the audit statistics for Twitter’s own username – @Twitter. This official username apparently only has 52% real followers. Yes, that’s right, if you believe these tools then it seems as if Twitter itself actually has 28 million fake followers. Possible? Yes, but highly unlikely.

So, now that we have taken a look at various aspects of the social media usage of both candidates, you can decide for yourself who is winning with these increasingly useful messaging platforms. While you’re thinking it over, don’t forget to check out the full infographic with many more social media statistics 2016 including a fun fact or two.

See also: How many of my Twitter followers are fake?