It seems like CEO Mark Zuckerberg updates Facebook just as much as any normal user does. His changes, however, affect the entire site and not just a personal profile. Read on to learn more about two of the Facebook team’s latest updates.

You may have noticed something a little different the last time you logged into Facebook: the newsfeed has, once again, taken on an entirely new look. This time, though, social media fans were expecting it, as Facebook’s team announced a year ago that they would be completely overhauling the design of the site’s home page. 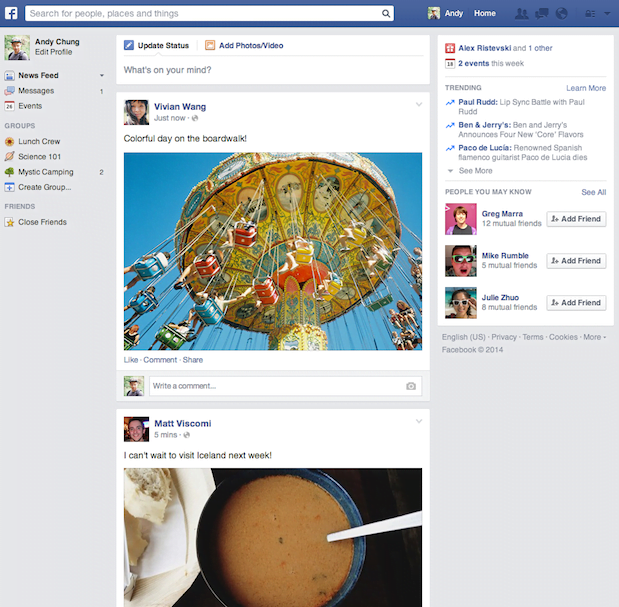 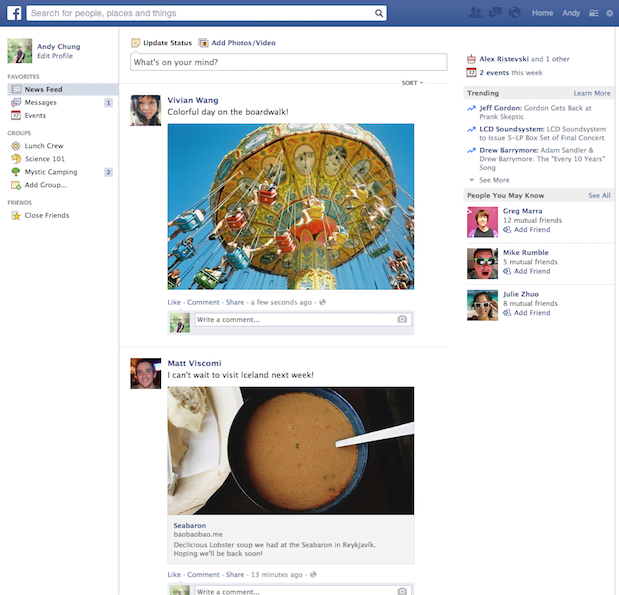 And while they promised the changes, the resulting layout is nothing like what they described in 2013. Only a small number of users tested the original site-design plans before the team ditched their original concept. Instead, they took their customers’ feedback into account to create the site’s new look.

Next time you log in — or, when your account updates — you’ll notice several changes. Status updates will appear in new fonts. This includes posted videos, which now boast larger titles in a serif font. The updates also affect posted photos, which are now much larger; in fact, they stretch almost the entire width of the News Feed. The team has also increased the size of the sidebar buttons in the “People You May Know” section. Finally, they’ve spruced up the icons that you click in order to update your status or add photos and videos — the former is now a dark blue, while the latter is an eye-catching light orange.

Facebook has promised, though, that none of these expansions will apply to the ads that line the sides of the site’s home page. Instead, ads will stay the same size in all regards; pictures and fonts will be just as they were before the update both online and on mobile.

From used pick-ups, to backyard play sets, to patio furniture covers, Facebook users have relied on the site to sell things in their homes that they no longer need or want. And, while these types of sales are innocent enough, Facebook has also recently announced that it will crack down on the sale of guns and other regulated items.
Now, Facebook pages that sell regulated items, especially firearms, will be required to include a legal notice and restrict users who are under the age of 18 from accessing the page at all. Most of their attention, though, will be directed at users and vendors who seem to promise illegal services, such as transporting firearms over state lines or providing customers with guns without performing a proper background check.

The legal warning will remind users that they must follow their state’s regulations, no matter where they’re looking to purchase a firearm from. Should posts go too far in their promises — and promise any sort of illegal activity in order to get a gun to a customer — Facebook will remove them.

Gun rights advocates feel that the new rules may be too restrictive of their First Amendment rights, but gun control advocates see it in a different light. In fact, organizations such as Americans for Responsible Solutions, Mayors Against Illegal Guns, and Sandy Hook Promise not only rallied Facebook to enact such measures, but also helped the website craft its plan of action.

This most recent push comes after a report from Mayors Against Illegal Guns revealed that tens of thousands of Internet users relied on the web to purchase illegal firearms. Facebook is stepping in front of this surge in order to prevent itself and other social media sites from becoming a new underground marketplace.

See also: 10 Ways Facebook Has Changed the Way We Do Business