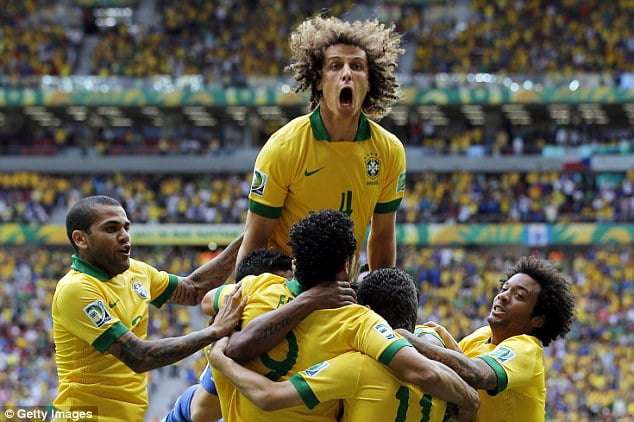 Even if you’re not a soccer fan, you have undoubtedly noticed that the World Cup is going on right now. How could you not? It seems as though overnight everyone’s Twitter and Facebook feeds have turned into running monologues about soccer games. If it’s not one person begging everyone else to “limit the spoilers!” on a game they DVRed to watch after work, it’s another person commenting on the impressive physiques of the U.S. Men’s National Team, or #USMNT, as those in the know call them.

While the U.S. has been bounced from the tournament, there’s no indication World Cup fever is letting up. In fact, here are nine social media stats about the World Cup that prove its impressive global popularity.

During a match between Brazil and Chile, an incredible 31 million people were talking about the game worldwide.

Those 31 million interacted with each other 75 million times, going back and forth about who would score, who would win and who would get yellow cards.

The country getting the biggest buzz on Facebook should be no surprise: That’s host Brazil, one of the favorites to win the title. But the next-biggest-buzzed country is the United States, despite the long held perception that our nation does not care about soccer.

The World Cup became the first event ever to spark 1 billion interactions on Facebook. That makes it the most popular event in the history of the social network.

The biggest day of the tournament, and the biggest single-day event in Facebook history, came on the opening day of the World Cup, when 140 million interactions occurred about Brazil’s opener.

Twitter users have sent more than 300 million tweets about the tournament since it started in June. That makes it one of the most popular events ever on Twitter. It has topped the 2012 Summer Games; in fact, it has nearly doubled the amount of tweets sent about that two-week event.

Not surprisingly, based on the Facebook stats, the most-tweeted game of the tournament so far has been the Brazil-Croatia opener, which spurred 12.2 million tweets.

Italian soccer player Mario Balotelli had a rather cheeky tweet he issued before his squad faced off with Costa Rica, saying if Italy won, he wanted a kiss on the cheek from the queen of the UK. People thought he was pretty amusing — that was retweeted a record 176,000 times.

Of course, on Instagram, where all things cute rule, the World Cup has been reduced to animal pictures. Specifically, 21 adorable dogs. Mashable put together a fun feature on dogs of Instagram who were dressed up as World Cup fans by their owners. Does this have any practical meaning? No, but it shows just how excited people have become on social media about the tournament.