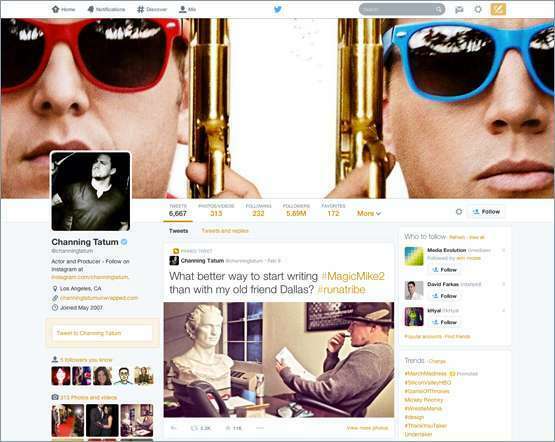 Remember all the furor that erupted a few years ago when Facebook rolled out Timeline, its redesigned profile page? Apparently Twitter doesn’t. The social-networking site has unveiled a major profile change of its own, and it actually is reminiscent of Timeline, in that it uses much more of the space on your screen, relies heavily on photos and allows you to say and show much more about yourself than the old timeline.

Already people are clamoring to figure out how to make the new Twitter profile settings work better for them, even though it’s only available to celebrities and new users for now. Here are eight smart things you can do to take full advantage of the changes when Twitter rolls them out for the general population later this year.

Twitter now allows you to post a large cover photo at the top of your profile, much like Facebook. Find something that conveys through the image what you or your business is about; that way you won’t have to waste valuable character space telling people.

2. Pin One of Your Favorite Tweets

Like desserts or sports teams, we all have a favorite tweet, one that speaks to our very essence. The redesign allows you to “pin” that favorite tweet to the top of the page, where everyone will see it when they look at your profile. Choose something that speaks to why you’re on Twitter or why you started your business.

Twitter will automatically enlarge your tweets that receive the most engagement. Find them, study them and figure out what they did to engage people. Then try to do that again and again with your future tweets.

One of the most valuable tools on Twitter is the ability to look at other people’s timelines whether you actually use the service or not. Now Twitter will allow you to sort through those timelines by filtering with tweets, tweets with photos/videos, or tweets and replies. Use this tool to get a feel for how your friends — and rivals — use the service effectively.

You know that photos/videos option mentioned above? It’s going to become more important as Twitter moves to a more visual presentation like hot rival Instagram. Make sure you’re getting all the traffic you can by posting images and videos that others can sort through on your timeline.

One smart way to use the new profile is to pin a tweet advertising your latest product or sale at the top of your page, where every visitor will see it. That way you don’t have to send out 30 tweets so no one misses it.

Before, Twitter was all about chronology. With its new redesign, chronology takes a back seat to relevance. Keep that in mind when sending out tweets.

These tips should help you take full advantage of new Twitter profile settings and make the most of your profile.