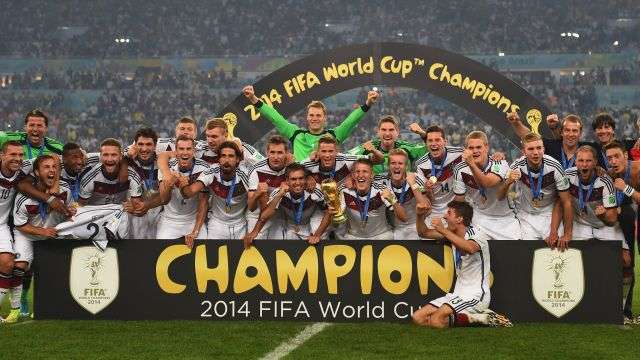 When most Americans hear the word “football,” they think of a brown ball with white stitching, a 100-yard field, and Sundays spent cozied up around the TV. Every four years, though, the World Cup flips that on its ear, bringing international football — or, soccer — to primetime TV. And, if you are tuned into social media, you know that this year’s World Cup certainly had the nation enchanted.

Just How Enchanted, Though?

This year’s World Cup final turned out to be the most talked-about sporting event in the history of Facebook. The championship match between Germany and Argentina inspired more than 280 million Facebook interactions, a figure that includes comments, posts, and Likes. This buzzing activity allowed the World Cup final to bump the 2013 Super Bowl out of first place, taking the title of most talked-about sporting event from the 2013 Super Bowl. The memorable matchup between the Baltimore Ravens and the San Francisco 49ers — remember, there was a 30-minute blackout and a Beyonce halftime show — garnered 245 million interactions.

Twitter also lit up during the final. Users around the world sent an impressive 618,275 tweets per minute, setting a new record for the site. Unlike Facebook, though, the previous Twitter record-holder was much fresher: it was set only a week prior during the shocking match-up between Germany and Brazil, which resulted in a 7-1 win for the now-World Cup champions from Deutschland.

Considering both Facebook and Twitter had record-breaking usage during the World Cup, social media fanatics might be curious to know which site won the game. After Germany took the trophy on Sunday, Facebook reported that the entire World Cup garnered more than 3 billion site interactions. Twitter, meanwhile, reported that 672 million tweets were sent during the sporting extravaganza.

It might seem like Facebook is the clear-cut winner here, but not so fast: it’s important to consider how many users each site has. Facebook boasts an enormous international membership base, with five times more users than Twitter. As of October 3, 2013, there were 500 million active users on the site, and, post-World Cup, the Facebook team reported that 350 million posted, commented on, or liked updates regarding the games. It probably makes sense, then, that Facebook wasn’t as concerned during the Cup with attracting new users to their site; they just wanted to prove that people would use Facebook to share their thoughts in real-time, something that most social media experts associate with Twitter. And while Facebook may have been proven to be a place for this sort of posting during the World Cup, it’ll take time before it’s clear whether or not it remains this way.

Twitter, on the other hand, wanted to prove to the world at large — and to its investors — that its users are, in fact, engaged. The site’s numbers during the cup certainly corroborate this idea. What remains to be seen is whether or not the users gained during the Cup will stick around, which has always been a problem for the site: only big events draw interest and interaction, while the Twitter team and its backers hope to see more steady usage.

Unlike the final game that saw Germany hoisting the trophy at its end, there’s no clear-cut winner when it comes to Facebook and Twitter’s World Cup battle. Social media experts will have to wait and see whether Facebook’s goal of driving real-time postings and Twitter’s dream of more steady interactions will come to fruition.

See also: 9 Social Media Stats About the World Cup That Will Astound You